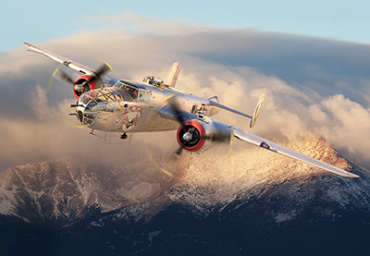 Nearly 10,000 of these twin-engine medium bombers were built by the end of WWII. The B-25 saw action in every major theater of the WWII and after the war ended many remained in service, operating across four decades. It served as a medium-altitude bomber, low-level ground attack aircraft, and mast-level attack aircraft against ships. The B-25 gained popular fame as the aircraft that struck Tokyo in the morale-boosting Doolittle Raid in early 1942.